The ratio between nurses and personal carers and populations over 65 tells you a lot about a country’s ability to provide adequate homecare. Here we track the number for eight OECD countries. Overall the ratio has dropped.

Two things stand out. First, the graph shows huge differences between countries. The ratio in Portugal is just 0.1 carer per 100 over 65s. That compares to ratios of as high as 9.4 in Israel and comfortable single digits in much of Western Europe. Secondly, it is interesting to see how some countries have bucked the trend and see ratios rise.

The ratios include both unskilled carers and skilled nurses. Shortages in both groups have been plaguing healthcare systems worldwide, impacting everything from hospitals to domiciliary care. As a sector, homecare relies exclusively on such staff.

The ratio has diminished in Estonia, Israel, Hungary and the Netherlands. Israel has seen a rise and then decline to its 2010 ratio. Portugal and Japan’s ratios are stagnant, with Portugal showing a tiny 0.1 nurses and personal carers for every 100 people 65 and over. Overall, the average ratio for this sample has decreased by 7.4% since 2010. What could be behind the decline?

Professional requirements for Dutch nurses have got tougher in recent years. Those with inadequate training or recent experience have been removed from the Dutch nursing register, and replacements have been hard to find. The Netherlands is a net exporter of staff, in part due to high standards of English, and the country lacks a robust model for forecasting nurse staffing need in the same way it does for doctors and medical specialists. 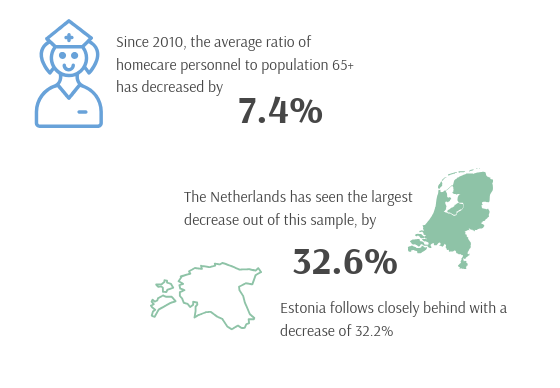 Israel has a high ratio at 9.4 nurses and personal carers for every 100 people 65 and over, yet this number has been declining since 2014. Israel has long-standing issues with training and retaining medical staff, and the diminishing ratio could be affected by a lack of trainees able to fill empty spots.

A favourable ratio of 4.5 in Japan was made possible by the implementation of long-term care insurance (LTCI) in 2000. The number of carers tripled between 2000 and 2013, but it remains tough to recruit and retain them due to low wages. Japan will need to increase the number of carers by 50% for it to retain its current ratio for 2025, yet this number has remained stagnant since 2013.

But some countries are managing to increase ratios, such as Germany and Switzerland. Since 2010, Germany has managed to increase its ratio of homecare personnel by 25%. Favourable policy changes are also in the works, with three ministries currently backing measures to be implemented next year which will improve wages and make it easier to recruit nurses and carers from abroad.

Recruiting and retaining staff is a challenge across the board. In the long run, governments will need to find ways to improve the attractiveness of the profession for nationals, as sourcing staff from abroad can only work in the medium term.